Wargaming rulesets and rule mechanics come in many different variations, but one of the mechanics that is almost universally accepted is the rolling of dice to resolve actions. Throwing a handful of dice across the table can provide a nice tactile component to the game. Moreover, rolling dice could create tension and help shape the narrative of a game. I guess most wargamers can recollect games in which the fate of the entire battle - at least in their perception - depended on the outcome of a single die roll.

Dice mechanics come in many different variations and flavours: single die rolls, buckets of dice, rolls to beat a target number, the resulting die roll as an index in a chart, the use of polyhedral dice, etc. One of my favourite mechanics is the opposed die roll. This article will delve a bit deeper into the mathematics of opposed die rolls, as well as some good practices on how to use it as a mechanic in your rules of play.

Opposed die rolls are in essence very simple. Whenever an action between two figures or two units needs to be resolved, both players roll a die. The numerical results are compared and the highest roll is declared the “winner”, with an appropriate result defined within the framework of the rules. Such a mechanism can be used on shooting, melee, morale, …: the usual actions one wants to resolve on the battlefield. Opposed die rolling is obviously not new and has been applied in many different rule sets over the years, if not decades.

The system is most flexible when we allow different types of dice (D4, D6, D8, D10, D12) to be rolled against each other. I realize that there is a cult of wargamers that consider a D6 to be the only proper die type permitted on the gaming table, but the generation of gamers that grew up with Dungeons & Dragons and other roleplaying systems think nothing of using the full array of polyhedral dice. Once you accept that idea, the die type itself can be used to represent a quality metric for a specific characteristic of the unit or figure. E.g. a figure can have a D8 for shooting, a D6 for melee, and a D12 for morale, with the higher die type representing a better ability in that specific characteristic.

The beauty in using a range of different die types is that die modifiers can be implemented not as numbers to be subtracted or added to the rolled result, but as changes of die type. E.g. an action that requires rolling a D8, but has a positive modifier, is upgraded to rolling a D10. As such, you apply the modifier before the die roll, rather than applying a bonus or penalty to the outcome of the roll. That might seem like a gimmick, but is actually very useful and creates a better flow of the game. Indeed, once die types are determined, both players roll their die, compare each other’s results, and can see in the blink of an eye who “wins” the action. There is no need to modify the results after the dice has been rolled. The naked die roll is what you get, with a certain level of excitement and an adrenaline rush when you see the rolled numbers pop up and you immediately know what the outcome of the action is.

Let us first look at some of the mathematics of opposed die rolling. Obviously, you have a higher chance of beating your opponent’s D8 when you roll a D10 instead of a D6, but what exactly are the probabilities?

For anyone who is a bit versed in probability theory, the probabilities are fairly easy to compute with a closed mathematical formula. For those who are not familiar with it, the best thing to do is to count all possible winning outcomes and compare them to the total number of outcomes. Let’s work through an example to show how it can be done. Suppose I roll a D8 versus your D6. I can roll 8 different numbers (each with equal probability), and you can roll 6 different numbers (also with equal probability), for a total of 48 possible outcomes. The table below summarizes all possible combinations that can be rolled. A “W” indicates a win for me, a “L” indicates a loss (or a win for you), and a “D” indicates a draw:

The same exercise can be repeated for other combinations of dice, of which the rounded results are tabulated below. Each entry gives the rounded percentages for a win, a draw and a loss result. E.g. when rolling a D8 vs. a D10, there is a 35% chance of a win, 10% chance of rolling an equal number, and 55% chance of losing. Of course, these numbers are reversed when rolling a D10 vs. a D8 (55% win, 10% draw, 35% loss), as you can see in the table.

There are some interesting observations to be made:

The above analysis provides us with the raw numbers. It depends on the nature of a specific rules framework how you want to implement opposed die rolling, but a few good practices make this system even more elegant than it already is.

A first recommendation is to use same-coloured dice for each type. All my D8 are yellow, all my D10 are red, etc. This allows for a quick grab of the right die from a pool of dice at hand. Although many gamers can blindly pick a D10 from a heap of dice, there are still many who have trouble doing so and will pick a D8 or D12 instead. However, colours are immediately recognizable and provide an additional visual cue. Many online shops selling dice allow you to specify the colours for individual dice and, in my experience, it’s worth the investment. Five or six dice of each type are enough to have a game running smoothly, without having to waste time looking for that single D8 you happen to own.

A second recommendation is that all bonuses and penalties that depend on the status of your own figure or unit, are applied to your own die roll. Suppose you take a shot at an enemy in cover. As cover affects the status of the defending figure, the defending die roll of the target is promoted by one die type. Technically, we could also apply a penalty on the die type of the shooter. But then, the player controlling the shooter has to ask the player controlling the target whether cover applies or not, whether he has moved or not, and so on. By designing the rules in such a way that each player needs to know just the status of his own figures without having to make detailed inquiries about others’ figures, the game speeds up significantly. Each player rolls his own die and can immediately shout out his result. The winner of the action can be determined quite quickly. Of course, it requires a gentleman’s attitude towards the game to trust one’s opponent in determining and rolling the right die type for his own figure (rather than the need to double-check everything).

But what about the resulting percentages? Looking at the table, we see that either increasing the defender’s die or reducing the attacker’s die does not make much of a difference. As an example, consider a base situation D8 versus D8 and let’s assume the defender is in an advantageous position. Either we increase the defender’s die to a D10, or we decrease the attacker’s die to a D6. The first situation would yield a 35% win for the attacker, while the second situation yields a 31% win. The difference between these percentages is too low to be meaningful in an actual game.

You can build and expand upon this basic system rather easily: 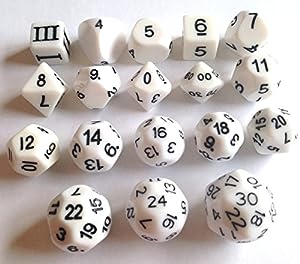 I fully realize that a mechanic such as an opposed dice roll does not in itself define a set of wargaming rules. You still need to give meaning to the actions that are resolved by rolling the dice. However, I do think it is important that you refine your mechanics in such a way that they become intuitive and easy to use. Moreover, there has to be a full understanding of the underlying mathematical probabilities to prevent the risk that your rules and the plausibility of events happening on your gaming table are not fully comprehended by all players.

Game mechanics also are a matter of taste. If after reading this article you still prefer the buckets of dice method, or swear by using D6s only, please do so by all means. But it can only enrich your understanding of game design when you have at least this knowledge of other methods, along with their good practices. After all, if you only know how to use a hammer, every problem looks like a nail.
Posted by Phil Dutré

What you can find on this blog

Our other wargaming blog